This site uses cookies to store your information on your computer. Read more Accept Deny

In the club of most-populous city of Pakistan, Faisalabad earns the third spot following Lahore and Karachi. The city which has literally witnessed Sikh and British Raj is nowadays economical hub of Pakistan, crediting to its agricultural production. Merely a century back, this fertile land of Punjab was the center of keeping livestock, which has emerged as Manchester of Pakistan, for its textiles mills and agricultural production. Today we have narrow-listed the Top 15 Best Hangout Destinations To Visit In Faisalabad, the epitome of historical and modern point of interests making Faisalabad happening city of Pakistan. 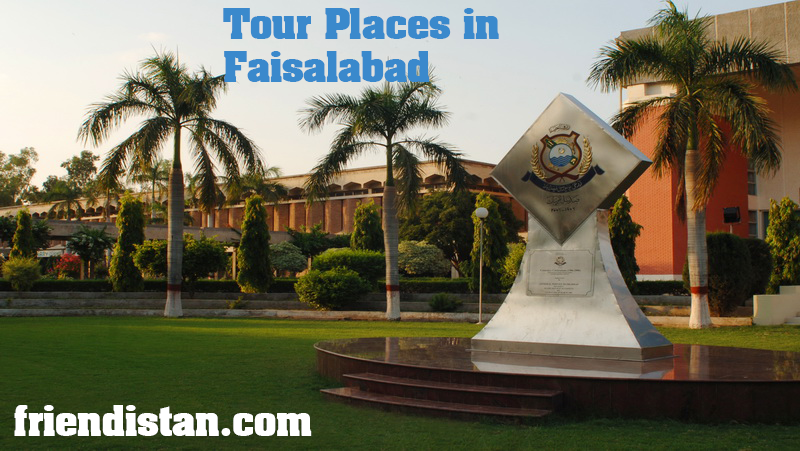 Beautiful and well-maintained park of Faisalabad, Pahari Ground is locally used for jogging and walking purpose in the city. What attracts children and families to this park is its calm atmosphere along with Pakistan air force fighter jet situated within its territory. Installed in the People Colony of Faisalabad, away from busty air of the city, Pahari Ground is famous in young lads for playing cricket and outdoor sports, being a source of good environment.

To preserve the textiles rich history of Faisalabad, Lyallpur Museum was planned in 2011, named after the old name of Faisalabad city ‘Lyallpur’. Surprisingly, the museum entertains more than 50 thousand visitors every year, tempting people of all ages for having flashback of Faisalabad’s legacy. Featuring 10 galleries depicting different times of past, the museum has become perfect holiday destination with kids to stroll a fine collection of historical artifacts and modern art pieces in Faisalabad.

Train stations may not excite many of us in this modern era of bullet trains, but what makes this station a must-watch is its antiquated history. Being one of the oldest structures in Faisalabad, built in early 1990’s the railway station surprises for being still functional! In urge of doing something unusual, travel through train of this station, savoring pleasant time without spending buckets of money for Venice.

Presenting tribute to legendary singer of Pakistan, Nusrat Fateh Ali Khan who was born in the soil of this city, the art and music auditorium is named after him for honoring his work in music industry. The auditorium in Faisalabad is widely used for hosting formal functions i.e. concerts, seminars and educational programs.

Perched out in park named Company Baagh in Faisalabad, this memorial tomb of James Lyall is pretty good hangout destination for children and history nerds in the city. Visiting the tomb of ex governor of Punjab, Sir James Lyall is all about studying the past of Faisalabad city, which was once into a bigger dwelling named as "Lyall Pur", fading away its colonial image of 1885.

Among several buildings of British times in Faisalabad, the Government College Faisalabad worth a visit for exploring the charisma of British era in Punjab, built during the rule of English empire, this is one kind of higher education institute in Faisalabad, which still serves thousands of students to earn degrees of international standards.

Here comes a real treat of Faisalabad, which may be the only reason for people to stop buy this crowded city! Rex City is basically a wholesale computer market that can surely be considered as technology hub of Faisalabad. Ranging from peanut-sized computer items to apple products, this market sells spectacular variety of technology in affordable prices. For the tech lovers, Rex City is more like a heaven, where the IT products are scattered everywhere, and branded, second-hand or fresh pieces in pocket-friendly range.

Established as meeting point for local town meetings of city fold, the Gumti Water Fountain is one of the preserved structures of British Raj in Faisalabad which nowadays serves as traffic roundabout.

Amtex Square is great contribution of one of the leading textile manufacturing groups in Pakistan, the Amtex group, bestowing biggest artificial waterfall of Pakistan in the centerpiece of square. This square is more like a beauty symbol of Faisalabad, depicting both architectural and historical features in this man-made waterfall.

Being the largest park in Faisalabad, this wildlife sanctuary in the town is ideal for picnic with family and children. Featuring manicured nature center, Wildlife Park, botanical gardens, lakes and rides, this wildlife park is top-pick tour destination for spending quality time in pleasant weather. What makes this wildlife park a big hit for the city is its enchanting lakes, brimmed with fishes and fresh water, allowing the visitors to sooth their souls and get entertained with availability of Speed boat ride.  Having different lakes for boating and crocodiles, the park is safe for children as well, which makes its personal favorite for families having kids with them.

Sitara Mall is more like a centaurus or shopping complex of Dubai for residents of Faisalabad. Standing proudly in the People Colony of Faisalabad, Sitara Mall is yummy treat for shopaholics, and in case of not having fat wallet, strolling the mall is pretty great idea savoring air-conditional atmosphere in Faisalabad.

(Note: The mall has its full-floor gym, food court and children’s area, making it best hangout destination for people of all ages in Faisalabad.)

Faisalabad is no doubt crammed with historical buildings and cultural hubs, but among such rich-cultural buildings, Sindbad Wonderland is installed for locals and visitors of Faisalabad to savor the electric rides and modern-time fun with family. Featuring bumper rides and arcade games for fun enthusiast of all ages, this entertainment complex is highly recommended for families to stop by!

Locally renowned as Company Baagh, Jinnah Garden is Faisalabad’s precious asset, absorbing classy food outlets, walking pathways, manicured gardens along with tomb of Sir James Lyall. Being different than traditional Garden, Jinnah Garden is popular for its Chenab Club, installed within its premises, the only elite class social club featuring a bowling alley, card room, indoor tennis tables and a full gymnasium for locals to get entertained with international standards.

Having historical prestige, Clock Tower of Faisalabad is must-to-do thing in Faisalabad, which was basically installed during British Raj in empire to represent his patriotic emotions for Britain. Forming the shape of the Union Jack flag for the United Kingdom, the clock tower was designed to stand in the center of Faisalabad city, adjoining 8 different sections which nowadays have their own local markets.

In the city of agriculture and textiles, it will be unfair to skip the institute of agriculture! Nothing can beat the vibe of stretching in Asia’s biggest university (by area), beautifully maintained and professionally handled to impart agricultural education that has made Faisalabad, the Manchester of Pakistan.